There is No Escape

I just got back from my first proper vacation in four years. 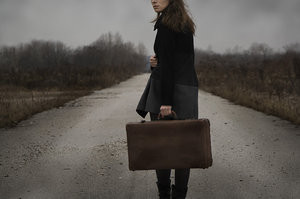 I've been anxious about travelling this year. The deep desire to disappear for a spell has been gnawing away at me but simultaneously, the notion filled my heart with dread. How would I feel several time zones away from home? Would events of this year seem clearer? Would I come to accept my new Mum-less reality and return home ready to start a new chapter without her? And who would be waiting at home to hear about my adventures upon my homecoming? Travel has wonderful healing properties - doesn't it?


In the past when I've packed my cases and gone off into the far blue yonder for a spell of exploring, it always felt like my Mum was there with me. Before I departed, I would make sure she had all my contact details. She was my first port of call when I actually arrived - a phone call home to her from our hotel, the first action I took to let her know we were okay. Part of the pleasure of going somewhere was to find the perfect keepsake to bring back for her. Mum didn't travel much preferring to stay grounded at home, so it was a treat to bring back stories, photos and souvenirs for her, to show her what we had discovered. She loved all the minute details, hearing what we ate, what we saw. Reporting everything back to her felt like reliving the experience over and over again with her approval making it all the more sweet. It felt like she was there with me every step of the way.


Unfortunately this trip was like no other I've ever experienced. Instead of gathering keepsakes to bring back to her, I carried an overwhelming sense of melancholy in my stomach. Going away to England didn't make me feel better about this year. Despite my Mum never setting foot in the country, being in London made me miss her even more. That quest for clarity? If anything, I felt even fuzzier about everything far from home. I continually would spot something I loved and have this incredible pull to tell her. Under normal circumstances I would have. I'd be straight on the phone - long distance, be damned - giving her the scoop immediately. Instead, there was no one on the other end of the phone line. My behind the scenes traveling companion was no longer with me.


The infamous notion that you can run away from your worries, or troubles is an attractive idea but I sincerely doubt that it is feasible. Grief and despair just end up stowing themselves away in your luggage. There is no escape. You just end up taking them along for the ride.


My trip was a long time in the making and I'm ever so thankful to have had the chance to disappear for awhile - even if the respite was felt only physically, not mentally or emotionally. If travel works its healing magic by making you think more deeply, or question where you are going, perhaps it has done its deed. All I know right now is that I seem to miss my Mum more than ever, and searching the globe for answers didn't do the trick. There is no escape.

I know we are following the same timeline, but it really is strange how the difficulties/worries are so entwined.

This summer for a lot of non-existant reasons i put off taking a vacation (much to the upset of my own family). I guess i have never really taken time to review why, but there is just something that has held me back, something that i can't really describe or justify.

Yes, there was the need to not leave my dad, but it's not like he wouldn't cope, yes there would be several other reasons but all could have been worked around.

One aspect that really struck home with me is that, 12 months previously we had a fantastic vacation, we came back fully refreshed which was much needed after the work troubles we had had for the previous 8 months, and thinking we had turned a corner and things were looking up. But what we didn't know was the worst was to come.

It is difficult to believe that 12 months prior, my mum was house sitting, all fit and well, thats what we thought then. Now 12 months on she has been gone for a number of months. I just don't want to accept that we cannot have the holiday we had previously.

I am sure that time will ease this situation, but everything remains very raw, and the stage of 1st just continues to grind onwards, the forthcoming festive season now being the difficult period on the horizon.

Whilst difficult, i do hope you enjoyed London, although it looks like you managed to leave at the right time, with the snow we have had these last few days.